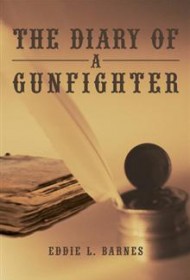 The Diary of a Gunflighter is an unorthodox approach to the Western genre: a gunslinger novel shot through with rhyme.

Fighting with the Confederate Army for a cause he doesn’t understand, Simon Sublette becomes a vicious killer with no remorse. Witnessing great atrocities, he watches his father and brother die. On returning home to Texas, he is shot in the face by a woman. Although it was an accident, Sublette takes revenge, killing her and her whole clan. He sells the family farm and is off on a long dusty Southwest trail of one revenge-killing after another.

Caught in an unexpected blizzard, Simon barely survives under the care of outpost-nurse Abigail Sweeney. She thinks him special, and he takes some liking to her, but when well, he’s moving on minus two toes and wearing small round dark glasses for his partial snow blindness. With derringer, sawed-off shotgun, .45 pistol, carving knife, and Sharp’s rifle, Sublette becomes known as “The Rhymer.”

When he’s about to kill to “make right, things done wrong,” the awful scar across his face twitches and the rhyming begins: “Most of your brains must have run down your daddy’s leg….deprived you of your wits….hell, I’d bet whatever gave you birth….didn’t even have tits.” The accompanying prose—often also falling into rhyme—allows the author/narrator to expand on The Rhymer’s diary. Making cameo appearances are Doc Holiday, the Earp Brothers, and Johnny Ringo.

This book is a display of fierce machismo. The rhyme spins out a bloody path as the grit of the plot and scenery unfolds rock-hard. The final result is too much rhyme along this tawdry trail, ultimately leaving readers disoriented and exhausted. Overall, the novel is a series of repetitively violent incidents, gratuitous in their lack of purpose and likely to deter all but the most hard-core readers who appreciate violent fare.