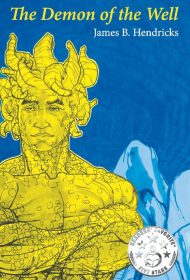 James B. Hendricks’ poetic narrative—written entirely in balladic stanzas—about an aged trader and his fantastical encounter with a demon in the middle of a desert wasteland, is a storytelling tour de force: effortlessly fluid, razor focused, and thematically powerful, with a timeless quality.

The narrator, a young boy at the time, recounts his experience listening to a village elder. The elder is a former trader who now makes his living as a woodcarver and who somewhat reluctantly shares the adventures of his life with the boy.

Years earlier, the trader accompanied two former soldiers deep into the desert as a guide. The two men buried an “ancient mystic chalice” in the sand near a sulfurous watering hole known as Devil’s Springs and are now attempting to relocate it. The magic cup, it seems, lets its owner see the future and the past.

But once the group reaches its destination and uncovers the treasure, the two men kill one another fighting to possess it, and the trader, pretending to be mortally wounded, survives an encounter with a demon—but loses his soul in the process.

After hearing the trader’s jaw-dropping tale, the young narrator and the old man hatch a plan to get the man’s soul back from the wily demon.

The fatal flaw of most stories told in poem form is imperfect execution—sloppy meter, forced rhyme schemes that negatively impact clarity, etc. But Hendricks’ tale is as smooth as desert glass: “The sun set like a burning ember,/ on the rippling dunes./ Its fiery light soon followed/ by the rising of the moon.”

The poem’s overall immersive quality is an additional strength, and the subtle use of sensory descriptors and imagery throughout adds a satisfying depth: “It was a demon right enough./ His presence named the place./ He wore a mop of tangled horns/ above a handsome face.// Ray-ribbed webs hung from his arms/ in mottled, sulfur tones./ His skin, a mass of crusty knobs/ like countless little stones.”

Fantasy fans will surely enjoy this tale, which feels as if it should be told while sitting around a fire at night somewhere deep in the wilderness.