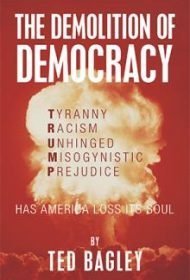 President Donald Trump’s impact on America will take years to assess, but Ted Bagley, a businessman and Vietnam veteran, is more concerned with the present. In The Demolition of Democracy, he sounds a warning about where Trump is taking the nation.

In these pages, Bagley reviews Trump’s words and actions during the early years of his presidency (the book was written before the 2018 midterms) and their impact on America. What Bagley sees as Trump’s sins are familiar to anyone who has been paying even slight attention. “This man has convinced his followers that coal is clean and will make a comeback; he thinks that racist organizations—like the Aryan Nations, the Ku Klux Klan, and the skinheads—are good people, that immigrants are rapists and murderers, that all news that don’t [sic] agree with him is fake news, that women are toys to play with, and that the military is his play toy and power base,” he writes.

Much of the book’s early part rehashes those incidents, but Bagley also tries to put current events in historical perspective throughout, writing about Jim Crow, freedom of speech and education, among other topics.

In its mission to condemn Trump, the book suffers from several issues, however. First, the content has been overtaken by recent events in Washington. In light of newer revelations— the Ukrainian affair, for example—much of the outrages the author writes about seem like very old news. Misspellings (“clan” vs. “Klan,” “electric” vs. “electorate,” “sewing” vs. “sowing”) undermine the author’s authority. In addition, the book is poorly organized, repetitious in spots and offers no bibliography or citations to support the work.

Well-read people will already be familiar with the charges Bagley makes about Trump. Those who don’t follow current events or who ignore recent history might find new revelations here, provided they are willing to overlook the book’s editing issues.