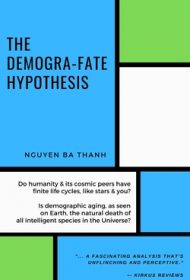 In The Demogra-Fate Hypothesis, author Nguyen Ba Thanh posits that a declining world birth rate, coupled with an increased median age in the world’s population, may lead to humanity’s extinction.

Birthrates for “more than 100 countries,” Thanh states, “have fallen below 2.1 per female lifetime, which is the minimum due to maintain a constant size of the population.” Modernization, he indicates, is at least partially responsible for this trend. “[T]he higher a country ranks on the development tables, the lower its fertility.” In highly mechanized countries, people no longer need multiple children to help with work or care for elderly parents or even to replace children lost, as in the higher death rates of earlier times.

The author doesn’t suggest, as some do, that a reduction of young, taxable workers in relation to an increasing number of retirees will necessarily lead to economic collapse. Thanh asserts that a “wide range of solutions,” including increased taxes, benefit cuts and a higher, technology-based, rate of productivity “can be combined to avert a systemic breakdown.”

Rather, the end of humankind might come from a smaller, fragile and more elderly population being exposed to a killer virus, natural catastrophe or simply from a lack of interest in procreation.

Thanh extrapolates that advanced, sentient beings on other planets might face the same extinction. His viewpoint is existential. Humankind does not have an overall purpose which it must live to fulfill. No deity would rescue it. Humanity would simply wink out. “Sentient species may bloom and fade everywhere, blindly and purposelessly, like wildflowers across the cosmic desert.”

Thanh’s arguments are cogent, although he sometimes omits explanatory details. It would be helpful, for instance, to know what he means, exactly, by “Skynet-feeding-humans.” Mitigating circumstances, like China’s campaign to increase population, are also omitted, giving the book a hasty feel.

The Demogra-fate Hypothesis should nonetheless interest those who want a quick assessment of current demographic trends.