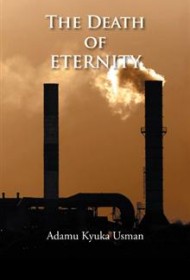 Adamu Kyuka Usman, a Nigerian lawyer who doubles as a novelist, takes on a crucial and timely subject–the despoliation of the West African environment by European corporate greed. Set in a lawless fictional nation he calls Cockde, Usman’s story pits the operators of the evil Chinaka Oil Refinery against the powerless villagers of Nunsa community, who live 100 miles downstream on the River Kodewa.

For years, the refinery has been dumping toxic waste into the river, but even as the death toll in Nunsa rises, there is no retribution. Cockdean “justice” is slow and corrupt; the polluters grow more arrogant than ever.

Enter an unlikely messiah called Tibor, universally addressed by the Africans as “strange white man.” Born in Hungary and raised on a gospel of eco-activism, Tibor means to bring low the villains, clean up Nunsa, halt diseases and reverse global warming. “I must work hard to spare the earth the fate of Venus,” he grandly announces. He will stop at nothing–not even murder–to save the world.

This is all well and good, but Usman reduces Tibor to a strident caricature who shovels seventh-grade earth-science lessons into the book with careless ease. And some of what the hero preaches is absolutely wrong, such as this: “Heat from global warming is giving hot pants to women and they are leaping at any man in sight. This is turning HIV/AIDS into tsunami waves. Don’t be surprised if seven women lay their hands on you begging . . . ” Global warming is also responsible for igniting Arab terrorism, Tibor assures us.

In the face of such nonsense (there’s much more), it’s difficult to take seriously Usman’s otherwise reasonable pleas for Third World economic autonomy and global environmental caution. His passion may be noble, but his story falls flat in the wake of these flaws.