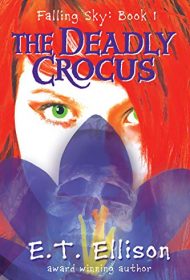 In E.T. Ellison’s The Deadly Crocus, Glix Larue is a seemingly ordinary teenage girl caught up in a fight to save her imaginary planetoid, Hallah.

Glix lives in the town of Quince and is about to be crowned a Queen of Niceness at the idyllic annual Fairdilly Fair when a terrifying phenomenon interrupts events: Parts of the sky are literally falling in.

Suddenly, Glix stops being nice and instead blurts out insults left, right and center. A mysterious mark appears on her hand, itching and throbbing as if trying to send her messages. In desperation, Glix runs away from home and, arriving in Fogwit City, is swept into frantic efforts to save her planet from Lady Crocus, a mysterious creature, apparently intent on both attacking Glix and destroying Hallah.

Ellison has created a magical, wacky world full of colorful characters, wild adventure, wit and imagination. Hallah is populated by strange beings and creatures, including butterwings, pranksies, sodbunnies, and help-fairies. Quince is a center of copper-craft, chocolate making and niceness, but Fogwit City is very different, as Glix learns when she becomes an overnight celebrity, working for the purple-skinned director, Berlyn Twick, at her famous Grapeskin Studio.

The Deadly Crocus includes clever word play and multi-sensory description in almost every line; for example, “her mind’s nose dialled into the waftosphere and caught whiffs of imaginary fragrances: ripe apricots, freshly torn in half; the pink-white flesh of a juicy strawberry with a bite out of it; cinnamon-peppermint frosting on a bubblegum flavored orange snap…” At times, the exuberant, original prose threatens to overwhelm the narrative, but familiar plot-lines – a romantic interest for Glix and a teenage rivalry—keep readers on track.

The only disappointment is the lack of conclusion, as The Deadly Crocus ends abruptly, leaving the story to be continued in the sequel, The Well of Life.

Nonetheless, this is a witty, fast-moving novel certain to enchant fantasy readers with its humor, world-building and wordplay.