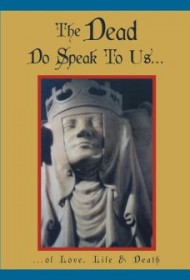 Death is a difficult subject to broach, yet it’s something all living things face, sooner or later. This photo book reflects a variety of the ways we honor the departed. The Dead Do Speak To Us…of Love, Life & Death pairs photographs of gravesites, stones, and other memorials with epitaphs, poems, and brief quotes from eulogies.

Editor Dayton Foster is one of four photographers credited here, and the photos he’s assembled cover a range of final resting places. There are fanciful angel-topped crypts and humble planks with a name and date painted on them, elaborate marble skeletons and even a small marble couple doing a frisky jitterbug (their page features two quotes, one of which is “…the thought of death is a good dancing partner,” attributed to Soren Kierkegaard).

The accompanying words are equally engaging and thought provoking. They range from the profound (“So Nature deals with us, and takes away our playthings one by one, and by the hand leads us to rest” — Henry Wadsworth Longfellow) to the mischievous (“Both marriage and death ought to be welcome; the one promises happiness, doubtless the other assures it.” — Samuel Clemens).

If there’s one thing to wish for with this oversize volume, it would be credits that indicate where each photo was taken and, in the case of large monuments featuring human likenesses, some identification of the deceased and the year of death. The photos are nicely reproduced here, so it would be useful to know more about their origins. For example, there’s a brick structure that looks like a beehive that surely must have a backstory; it’s a beautiful photo, but leaves behind more questions than it answers.

The Dead Do Speak to Us…succeeds despite this quibble. It’s an artful pairing of words and photos that can be viewed as a coffee table book (it’s a pleasure to open at random) or a more serious look at grief, love, and memory.