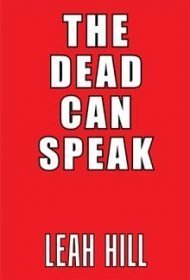 In The Dead Can Speak, author Leah Hill describes her marriage to a man she believes to be possessed by spirits, as well as her own conversations with the dead. The book is very short—Hill typed it all on her phone—and quickly gets both complex and confusing.

In chatty prose that leapfrogs from subject to subject, Hill mentions being “a bipolar entity,” describes various ghosts the couple believes are communicating with them, the births of her children and a bout of postpartum psychosis, and numerous theories about demons and access portals to Heaven, which she believes are under her and her husband’s control. She lost custody of her daughter and hopes they will be reunited, claiming that she has a role in the governance of Heaven as well.

The Dead Can Speak is unsettling to read, as it’s laced with startling ideas that are never fully explained. For example, Hill describes kicking her husband out of the house and taking up with a drug addict (who got her hooked on drugs) in an attempt to make him jealous. Her recollections of that time illustrate the problems readers will have following her story. “So this new guy would do his drugs, and look in our closet where the yellow gate is and was Heaven,” she writes. “I just created a whole new Heaven for God, so demons can not [sic] get there.” She notes that she won’t explain more “in case I have unwanted people around me reading my book or mind.” Just as readers are trying to absorb this information, she changes course: “So anyway, the new guy was pure evil. He was a con artist…Holy crap, as I just figured this out as I’m writing!”

Disorganized and jumpy, The Dead Can Speak is extremely difficult to follow. Major revision is required in order to create a narrative that readers can access.