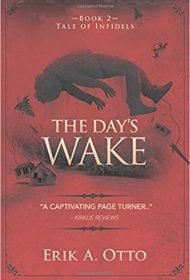 After a gravity reversal, the world has been quite literally turned upside down in The Day’s Wake, the second installment in Erik A. Otto’s ambitious A Tale of Infidels trilogy.

The fantasy kicks off in the wake of a prophecy realized in Matteo’s Lands. The prediction in the ancient religious text, the Book of Canons, was that “the world will turn” on the Day of Ascendancy. Indeed, objects, people and animals have lost their gravity and have been torn from the safety of the earth. The Third Internecion, a period of chaos and violence promised to follow, will begin in 100 days.

Thus, Otto launches the follow-up to his promising debut, one that features memorable characters, a richly realized fictional universe and a solid sense of action, intrigue and mysticism.

The Day’s Wake continues the pattern, even as its mood turns much darker and the author offers new characters to follow. The first book focused on a disillusioned religious acolyte, a princess forced to travel far from the comfort of her own realm, and a would-be warrior whose military training quickly turns from theoretical exercises to the exigencies of the battlefield.

Here, Otto focuses on another trio, all with ties to one of the earlier protagonists. Baldric, “The Good Son,” is the brother of the cadet Darian; Zahir, “The Jailor,” has been charged with the custody of the Princess Hella and struggles to get her out of Jawhar after the world briefly turns on its head. Nala, “The Naustic,” is a friend of Sebastian, the religious student turned pariah.

As the plotlines develop and eventually intersect, Otto expertly develops and expands the world of Matteo’s Lands. The characters eventually investigate clues about dramatic shifts in the world’s ecology and archaeology to learn the real reason behind the brief but hugely destructive gravity shift.

As in the first book, the author creates compelling, believable characters. Otto’s writing talent shines particularly strong in depicting an atmosphere wracked by destruction, one that’s on the brink of an even darker period. In describing the impact of the “world turning,” the author’s eye for detail summons a biting sense of reality. Though the sheer amount of detail and intricacy demands attention, Otto delivers an unforgettable atmosphere of woe and despair.

Readers willing to fully enter this world will be champing at the bit for the series’ resolution.