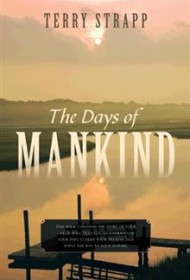 The Days of Mankind is an analysis of the first chapter of Genesis and includes life-application principles for today. Author Terry Strapp hopes that readers will “see themselves mirrored in the creation story as though God is speaking to them.”

Each chapter focuses on one or two verses from Genesis 1. For example, Chapter 9 examines the tenth verse, which reads, “and God called the dry land Earth; and the gathering together of the waters called he Seas; and God saw that it was good” (The Dake Annotated Reference Bible, KJV). Strapp interprets that verse to mean the land existed under the water before the waters were gathered into seas. He tells readers that their lives, “like the dry land, may be flooded with issues, but…God will never put more on you than you can bear.” As God called the land from the water and gave it new life by His Word, He speaks into lives and brings about change today.

Strapp effectively uses analogies to clarify difficult concepts for readers. To show that the origin of man is traced back to God–even if the man is living in a sinful state–Strapp uses an apple comparison: no matter what state an apple is in, the apple originated from an apple seed. Another helpful element of The Days of Mankind is the annotated table of contents that lists the key concepts for each chapter.

Readers interested in the study of the creation scriptures will find that Strapp’s interpretations are unique, moving past the surface story, and providing what he calls “hidden truths” that the Lord revealed to him. Even when the symbolic relationships he offers are out of the ordinary, he explains his reasoning and supports his interpretations with scripture found elsewhere in the Bible, ultimately making for a satisfying read.