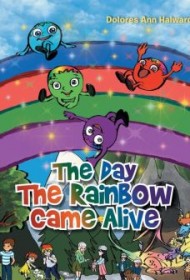 The introduction tells the origin of the creatures, who were born of a rainbow, and their mission: to teach children on Earth about love, hope, sharing, respect, trust, and compassion. The creatures’ assignments are each tied to a specific place: Remmy, the red sphere, is to teach about love in Russia, for example, while Grenny, the green sphere, teaches about hope in New York. Six colors of the rainbow are mentioned (red, green, blue, purple, yellow, and orange) in the origin story and on the “assignment list,” but the yellow and orange spheres are strangely missing from the rest of the book, and from the rainbow on the front cover.

Though the four stories in the book are interesting and show kindness displayed in many forms, the “lessons” sometimes seem a bit wide of the mark. For example, the first story features Johnny, a six-year-old boy who is bullied and has his lunch stolen by other children. A visit from Blummy, the blue sphere, encourages him to ask his mother to make extra lunches, and after a cursory scolding of the bullies by Blummy and some talk of making “a better world full of harmony while sharing,” Johnny offers lunches to the kids. Sharing is undoubtedly a virtue, but it’s hard to imagine this tactic being effective against bullies.

The note on the back cover reads: “Overall, this is an imaginative [sic] exciting children [sic] story.” Indeed, children will probably enjoy the story. Still, the grammar and syntax is stilted at times, and can prove distracting. And while the illustrations are generally solid, the characters don’t always match their stated ages or appearances exactly.

Ultimately, The Day the Rainbow Came Alive is a book of great, but only partially realized, potential.