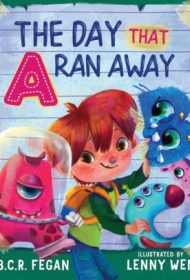 In this richly illustrated children’s picture book, a boy weaves a tall tale to explain away a missing assignment.

As The Day That A Ran Away opens, a young boy named Jet is confronted by his teacher, who notices he hasn’t written down the alphabet as instructed. Jet insists that he did, but that the letters escaped or have otherwise gone missing: Some ran off; some are doing other activities, and at least one may have been stolen. Once he concludes, his teacher—who sees through his ruse—asks him to teach the letters a lesson by writing them down 20 times.

This book’s fun concept is brought to life through textured illustrations that each contain at least one hidden-in-plain-sight item whose name starts with the letter featured on that page. Young readers will enjoy the elaborate images and funny anecdotes, and the premise allows them to review the alphabet in a fresh way.

The text, though, would benefit from a more nuanced approach. The majority of the letters behave individually, flouting a greater sense of plot or narrative: “F never made it; perhaps she got lost./ G wasn’t free. He said that he cost.”  This lack of build makes the overall story less memorable and engaging. Further, each letter vanishes for reasons seemingly unassociated with the letter, and, oddly, only some of the illustrated letters are depicted in a way that corresponds with the letter’s sound (K is drawn like a king, for instance, but J looks like a lizard).

Simplistically told, The Day That A Ran Away could be enhanced with the adjustments mentioned. Still, it offers a witty voice with a wealth of visual interest. Young children are bound to enjoy this entertaining and amusing picture book.