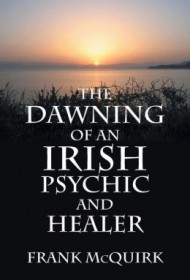 In 1927, author Frank McQuirk was born the seventh son to an Irish family, and according to local folklore, his birth order portended psychic abilities. McQuirk’s memoir not only makes a case for the prediction, but also offers readers a vivid look at his Dublin childhood, filled with the hardships of poverty and complicated by WWII and fierce confrontations with the British. Readers also accompany the author to the nine countries where he lived as an adult while working at diverse jobs (from construction to magazine editor). Along the way, there are enduring friendships and flickering romantic interests, all told with endearing good humor.

Although his travels and relationships would alone make for a compelling read, McQuirk’s focus is on the discovery and tending to his psychic gifts. The author’s exposure to the supernatural comes early in life. During his father’s stint as an electrician in a local lord’s castle, one of the housemaids demonstrates to the young Frank what she calls “psychometry” by identifying the energy in objects held in her hand, while another practices astrology and reads his charts. “What she had predicted came to pass,” the author recalls. Decades later, he meets Mary Valla, the renowned California psychic, and is taken on as a student.

Under Valla’s tutelage, McQuirk relates that he not only masters the reading of auras but also astral travel to other dimensions. Additionally, he is able to commune with the spirits of Ralph Waldo Emerson and Andrew Jackson Davis, Jr., known as the “Poughkeepsie Seer.”

The book is well organized, following in sensible chronological order. One minor criticism: McQuirk’s simple writing style, clear and direct but generally without artistic flair, may leave readers feeling a bit detached from his extraordinary experiences. Will readers ultimately be convinced of McQuirk’s psychic gifts? That may depend on their level of belief in the supernatural. But even those who doubt will unquestionably enjoy the telling of this cheerful soul’s impressive adventures.