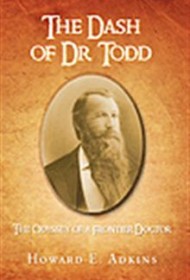 Beginning with a catastrophe at sea and ending with a deadly epidemic in Idaho, this well researched, well-delivered historical novel touches on many of the salient details of the American West in the mid-19th century.

The vehicle for this exploration is Daniel Todd, whom we first meet as a newly minted physician bound for California in flight from the stern demands of his God-fearing New England father.  On the journey, he becomes the sole survivor of a shipwreck, is rescued by a whaler, and spends nearly a year chasing down sperm whales and honing his medical skills on sick and injured crew members before finally making it to San Francisco.  There, he rooms in a bordello where he treats the complaints of both patrons and residents, later comes up with the idea for canvas jeans, and then heads north for the mining camps where he will find adversity, disease— and true love.

The detailed descriptions of the era’s medical practices may be a bit too heavy for general readers (the author is a retired doctor), and Daniel’s personality doesn’t seem much changed by all he endures, making him more of a vehicle for the author than fully realized character. Nonetheless, the novel provides valuable insight into the everyday hardships of frontier life. Daniel sees it all — the wounded from Indian raids, the sick from cholera outbreaks, the injured from mining shaft collapses — and does his best to alleviate suffering.

More important, he provides a front row view of the years between the first flush of gold fever in the 1850s and the Indian wars of the 1870s, a period when the West was suddenly neglected while the rest of the nation was nearly consumed by the fires of the Civil War. Despite the story’s minor drawbacks, readers will enjoy this serious and memorable view of frontier life and the hardships that often dominated it.