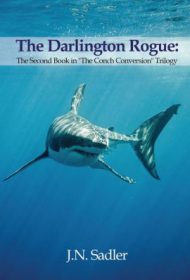 Thematically comparable to H.G. Wells’ 1896 classic The Island of Dr. Moreau, the second installment in J.N. Sadler’s science fiction trilogy (after The Conch Conversion) continues to chronicle the consequences of the actions of a late scientist whose lifelong goal was to create a new species of human that could breathe underwater and survive a looming environmental collapse.

Thomas Latimer and his two buddies, Jason and Ivan, have vowed to discover the mythical wild branch of the Darlington River. If rumors are true, the river appears in different spots at different times and leads to an unexplored “sylvan haven.” To finance their potentially dangerous expedition, Latimer seduces a wealthy widow, Nara, whose estranged husband recently died in a horrific plane crash. The sexually uninhibited 40-year old turns out to be much more than the 23-year old Latimer expected.

A world-class swimmer and diver, Nara’s father worked closely with the late Dr. Warren Wild, who wanted to reverse Darwin’s theory and create a human being that could exist underwater. With the wealthy widow financing the journey, the men reluctantly agree to have Nara join their group—but when the adventurers find the mythical river branch, dubbed the Darlington Rogue, Nara reveals some jaw-dropping truths about her real reasons for wanting to accompany them.

Like the Wells classic, the thought-provoking premise and scientific speculation effectively power this short narrative (essentially a novella): “We believe that Man came from the sea,” writes Sadler, “and to prove it, we are converting Man… into sea-breathing creatures, once again.” The story seems rushed, however, particularly in the last chapter where the author packs many years into just a few paragraphs. Also, word usage in places seems strangely dated, with the young men using terms popularized several decades ago, like “dame” and “old broad” to describe Nara.

While a fuller telling would widen the appeal of The Darlington Rogue, overall, this is a fun, fast-paced science fiction adventure.