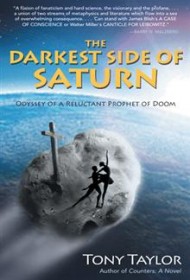 This extraordinarily well-crafted and deeply thought-provoking novel about a scientist who discovers an asteroid on a collision course with Earth is nothing short of a science fiction tour de force; a courageous and visionary work that is comparable in thematic power to Walter M. Miller, Jr.’s Hugo Award-winning novel A Canticle for Leibowitz.

Set largely in 1997, the story revolves around Harris Mitchel, an overworked engineer employed at Advanced Technology Laboratory in Southern California, who—along with coworker Diana Muse-Jones—detects a massive asteroid two miles wide that, if their calculations are correct, will collide with Earth in 16 years. But when Mitchel goes public with the information in an attempt to somehow avert the potential looming disaster, he is met with contempt and disbelief, from a dangerously fanatical preacher and his followers to a loudmouth radio personality to the president of the United States himself.

Disregarding the science behind Mitchel’s claim, the media instead focuses on his possible affair with the attractive Muse-Jones, and soon the engineer is demonized by countless religious followers who believe he is “the grand prophet of doom.” As his personal life crumbles before his eyes, he perseveres even though no one seems to care. But readers who think they know where the novel is going are in for a jaw-dropping, unforgettable literary experience!

To classify this novel as simply science fiction would be a grand disservice: It’s an apocalyptic thriller, a powerful romance, a cautionary tale about religious fanaticism, and, above all else, a disturbingly insightful self-examination of humankind and our apparent decline into a society powered by apathy, ignorance, and intolerance.

In the introduction to the 2006 reissue of Miller, Jr.’s 1959 post-apocalyptic masterwork, Mary Doria Russell describes A Canticle for Leibowitz as a novel that will change all those who read it. The same can be said for The Darkest Side of Saturn.

This is an instant classic.