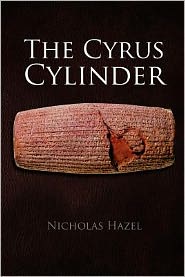 In this novel of political intrigue, Nick Moor of the Association of Research Universities (ARU) becomes involved in mystery and murder as university presidents from around the world gather for the ARU centennial in Washington, D.C.

The book centers on Kourosh Fathi, the chancellor of the University of Tehran, who is unexpectedly granted a visa to attend the event. Fathi, who had studied some 20 years earlier at the Oriental Institute in Chicago, is an expert on the Cyrus Cylinder, an important Persian artifact. Nick is aware of the controversy — and possible scandal — that surrounds Fathi, who abruptly left the U.S. in 1979 when the Shah of Iran fell.

The book’s premise is interesting, but there’s simply too much for readers to comprehend in so few pages. The Cyrus Cylinder is an actual object: a terra-cotta cylinder from the 6th century BCE covered in cuneiform script from Cyrus the Great. Often considered the “first declaration of human rights,” the Cylinder was used for political purposes by the former Shah of Iran.

That should have been enough to drive the book; instead, the artifact’s importance gets lost in the plot’s complicated machinations. Nick believes he sees a body — possibly Fathi’s — get pushed over the balcony. But there is no body – and no proof. Shortly thereafter, a colleague is murdered, followed by an explosion, another body and the disappearance of the Cyrus Cylinder.

By book’s end, there’s so much going on that readers would need a decoder ring to keep track of it all. Fortunately, the author employs Nick’s Uncle Curt, who happens to be CIA, to explain all the nefarious motives for the murder and mayhem.

Nicholas Hazel is a solid writer, so despite the frustration of “who’s on first?” readers will take away an appreciation for the Cyrus Cylinder. And those who missed history class that day should be intrigued enough by the story to look more closely at this important — and oft overlooked — political football.