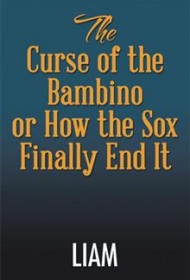 The “Curse of the Bambino” was popularized by Boston Globe reporter Dan Shaughnessy in a 1990 book of the same name. A quarter-century later, an author who goes by “LIAM” has provided his own take on the curse, along with a heaping helping of Boston Red Sox history, in The Curse of the Bambino or How the Sox Finally End It.

In truth, the curse, which referred to Major League Baseball’s Red Sox failure to win a World Series, is already over: The Sox ended what was ultimately an 86-year drought by winning the World Series in 2004, and Boston added two more championships in 2007 and 2013.

The supposed curse was triggered by the team’s 1919 decision to sell Babe Ruth’s contract to the rival New York Yankees. (“Bambino” was one of the baseball superstar’s nicknames.) LIAM describes Boston’s subsequent travails through the decades, culminating in the 2004 championship.

Anecdotes about the players and managers abound in the book, although most will be of greatest interest only to hardcore Sox fans. Readability is hindered by overlong blocks of text, such as one paragraph that runs from page 61 to page 63. (That paragraph also includes a judgmental aside that readers may find intrusive; relating a player’s suicide, LIAM concludes in caps: “This is not the way life is suppose [sic] to end. NO MAN OR WOMAN HAS THE GOD GIVEN RIGHT TO END THEIR LIVES, ONLY GOD CAN DO THIS…”)

The book suffers severely from the lack of strong copyediting. Like any Red Sox obsessive, the author has no trouble spelling Carl Yastrzemski (and other Sox players’ names), yet Katie Couric becomes “Katie Currie.” Missing words, inconsistent capitalization, misspellings and punctuation issues abound.

That said, Sox fans inclined to overlook such technical issues (widespread as they are) might be interested in LIAM’s unarguably expressive account of Sox history and how the franchise finally overcame the curse of the Ruth sale.