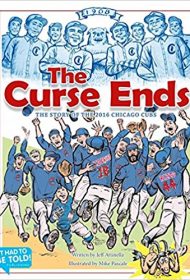 The Cubs’ success in 2016 is more remarkable when seen in the context of the 108-year championship drought that preceded it. Thus, Attinella sets the stage for the 2016 story by first explaining the legend of the “curse” bestowed by a man whose goat was refused admittance to a game at the 1945 World Series: “‘You will never win again!’ the man proclaimed aloud,/ and thus “The Curse of the Billy Goat” fell over the crowd.”

The Cubs failed in that series and became known as “Loveable Losers” for decades. In rhyming verse, Attinella then describes the magical season of 2016, from the team’s composition, to its playoff wins, and finally, to the dramatic World Series win, with a final game interrupted by a rain delay.

Attinella seems to expect a certain level of familiarity with baseball and the Cubs: Among other unexplained references, he mentions “GM Theo Epstein,” and refers to many Cubs players by last name, without explaining that GM means “General Manager” or providing a full roster list (something many baseball fans would appreciate). But these points don’t affect the bigger story about the Cubs overcoming their long history of disappointment.

Attinella’s rhymes are simple and, with a few exceptions, largely effective, and Pascale’s illustrations do a great job of conveying the story, while also providing plenty of additional visual material in the backgrounds. Notable are pages that list the Cubs’ season schedule, and later, a montage of a variety of newspaper front pages announcing the Cubs’ victory. Pascale’s facial likenesses are also very good, essential in a book that features a large cast of real people.

The Curse Ends is recommended for young Cubs fans, of course, but also for any sports fan who loves a great story with a happy ending.