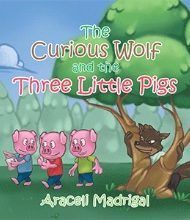 Araceli Madrigal spins an old fairy tale with a new twist in her picture book The Curious Wolf and the Three Little Pigs.

In Madrigal’s version of the oft-told tale, the wolf isn’t dangerous, but merely curious and seeking to be helpful as the three pigs experiment with architectural plans involving hay and sticks. The wolf is a somewhat lonely figure, consistently turned away by the pigs as his efforts to test their houses’ strength are misinterpreted as attacks. Finally, the pigs take one of the wolf’s suggestions, building with bricks instead of rocks or mud, and thank him by inviting him into the sturdy home.

The story’s concept is strong enough to engage an audience. But a tale based on miscommunication paradoxically requires a high degree of writing precision to successfully convey the characters’ thoughts and motivations. Instead, this book’s text is spotted with overlong sentences and redundant phrases (“[..] I’m sure that if I let them know that they need to use something stronger to build their house, I’m sure they will let me help”). Strange wording also makes for clumsy reading (”They obviously know how to build a house but just that the straw wasn’t strong enough”).

The wolf is generally appealing and intelligent, but he never seems to understand that the pigs might see him as a threat, even as he destroys their houses. It’s equally unclear whether the pigs view the wolf as a danger or just an annoyance, which clouds the pigs’ intent as they refuse his help.

The illustrations are generally adequate, although on the book’s final page, in which the wolf and pigs plan to build two more brick houses after the first is shown to be adequately strong, the illustration shows four finished homes instead of three.

The Curious Wolf and the Three Little Pigs may intrigue some small children and generate discussion about miscommunication. But more polishing is needed to lend the story wide appeal.