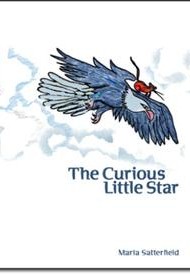 In the style of Aesop’s Fables, The Curious Little Star tells the story of a star who leans past the clouds and falls to earth. The animals below devise a way to carry her home and, as with many fables, the tiniest individuals are revealed to boast the bravest hearts.

Estrellita is a young star with a big imagination. She often peers past the clouds to glimpse the beautiful Earth far below. One day, Estrellita lets curiosity get the best of her: she leans too far and falls, landing on a beach. Nearby animals task a mouse and eagle with fetching their king, the lion, who tries to organize the animals to help the star. The winged black beetles finally volunteer to carry her home. Her grateful mother gives each of them a parting kiss, and to the beetles’ surprise, the kiss allows them to glow, giving the world its first fireflies.

A sweet story, The Curious Little Star is easy and fun to read, despite a few grammatical errors. The accompanying illustrations are not quite as professional as one might hope, but remain fittingly colorful and fanciful. Unfortunately, the title character lacks agency throughout the book: she falls to earth rather than journeying there, and once arrived, she cowers rather than explores. Most disappointingly, she doesn’t even contribute to her own return home. The story would have conveyed a more powerful message had the author given this character more resourcefulness.

Despite these flaws, the book compliments other fables available for children and is generally a charming story about losing – and rediscovering – the way home. To amend lapses in the story, reading partners may choose to prompt conversations about what else Estrellita might have done during her time on earth—and brainstorm other ways she could have returned to her mother.