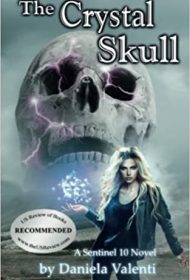 In Daniela Valenti’s latest paranormal romance, The Crystal Skull, two protagonists with supernatural powers struggle with relationship issues while investigating attacks on others like them.

Amanda is the world’s only Sentinel 10, and James is a 9. That power differential causes stress in their relationship, but their biggest problem is Alain, Amanda’s late boyfriend. While James might be “perfect,” Alain was Amanda’s soulmate — “the first man who showed her that he really loved her, and also needed her desperately, to save himself form the terrible darkness in his heart… Or maybe she had just wanted someone to save and feel good about it.”

While Amanda and James work on their differences, someone is killing lower-level Sentinels in psychic attacks. Called to investigate, the two discover that Amanda’s psychic—and psychotic—late boyfriend may not be dead after all.

The story offers skillful world-building and description as tension regarding the protagonists’ love interests propels the novel forward. However, some of the storytelling elements seem forced. Amanda, for example, is an anesthesiology resident, but she’s never in the hospital or seen acting like a doctor. While described as powerful, she seems nearly passive in her relationships. James is a former pilot, but readers see him mostly working out, doting on Amanda and accompanying her on her global crime-fighting trips.

Additionally, although most of the novel is told through Amanda’s viewpoint, one chapter is told from the viewpoint of her best friend Lydia, and a complete section is seen through another character’s eyes. These changing viewpoints can be jarring.

Despite the book’s shortcomings, readers who enjoy chastely described paranormal romances will likely read to the story’s conclusion to see if Alain is back and if the Sentinels can be saved.