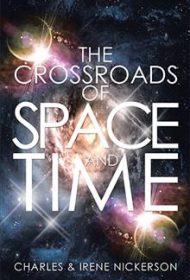 Part space opera, part fantasy, and part Star Trek fan fiction, this book creates a universe of animalistic aliens. The first in a planned series, The Crossroads of Space and Time shares the adventures of two space bears named Tiberius and Babs, who are sworn to protect the Bearian Federation.

While difficult to follow, the plot broadly involves the interaction of Tiberius and Babs (also known as Brinton and Allis Tornbow, among other titles and aliases) with Bearians and other races while traveling to the Aldrin System onboard a luxury space transport. They attract danger wherever they go, but are aided by friends, including a dragon healer named Anabelle Rosa (also referred to as Anabelle Rose).

The fact that the characters are bears isn’t essential to the story, but occasional mentions of “gentlebears” instead of gentlemen, and the substitution of “paw” for hand, serve as cute reminders that they aren’t human. Unfortunately, readers will likely need more help than that to stay focused on this confusing story, which freely borrows races, names, and technology from the Star Trek television series, as described in the Introduction.

This work is marred by abrupt shifts in scene without transitions and characters’ exceedingly lengthy names and titles (e.g., “Annabelle Rosa Valorous Knight of the Garter of the Maxumus Clan. Daughter of Isadora and Samuel Valorous, First of the Seven Children of Harvenger’s Glen, the first Rose of my father, and a Dragon of the Clan Maxumus”).

In addition, errors in grammar, spelling, punctuation, and word usage (“set” for “sit,” “do” for “due,” “presents” for “presence,” “there” for “their,” etc.) appear on nearly every page, making reading difficult. Frequent improperly punctuated run-on sentences also present challenges, with meaning often obscured.

Although an ambitious book and planned series, this book requires aggressive editing in order to appeal to more than the most patient science fiction and fantasy fans.