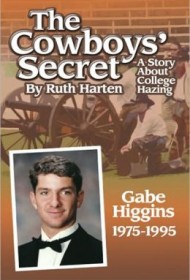 Ruth Harten was devastated when her 19-year-old son Gabe drowned while away at college in 1995.

But soon shock was replaced by doubt. She was told that Gabe had died during a camping trip with members of a fraternity he was joining. Harten at first believed it was a tragic accident, but as she asked questions about that night on the Colorado River, she became convinced her son was a victim of hazing.

Her search for the truth has resulted in The Cowboys’ Secret.

The Texas Cowboys is a 90-year-old men’s service organization – a fraternity for all intents and purposes – at the University of Texas. Gabe, a UT sophomore, sought to join the group, highly regarded as an elite association. But the Cowboys also have a dark side, having been disciplined regularly for hazing, bullying and alcohol violations.

For two-thirds of the book, Harten writes about her son and his college life and reconstructs events leading to his death and its aftermath. She builds a fairly convincing case that he hadn’t drowned while swimming (he was wearing cowboy boots when found, and it was hours before police were notified that he had disappeared). Subsequent investigation led to the Cowboys being barred from the campus for five years, and the group settled a lawsuit brought by Gabe’s family.

Harten uses the book’s last third to take on America’s hazing culture– “gang behavior” she calls it. She gives examples of other hazing deaths, and tells parents what to watch for if their child wants to pledge a fraternity or sorority.

Harten writes carefully and thoughtfully. She’s not grinding an ax – a religious woman, she says she has forgiven the Cowboys – but seeks to rally administrators, students and parents against the dangers of hazing. With its added element of real-life crime and mystery, her book holds appeal for parents and general readers alike.