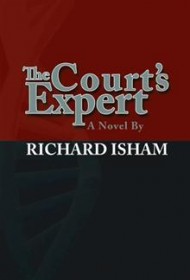 Richard Isham funnels five decades of his real-life litigation experience into this detailed legal thriller, The Court’s Expert, a book as edifying as it is entertaining.

In Isham’s story, private duty nurse Marti Barnes helps rich California rancher Larry Martorano cope with a rare immune disorder and receives a promise of a substantial inheritance upon his death. Instead of a generous income, however, what Marti gets after Larry’s passing is accusations. His family brings criminal murder charges against Marti, alleging that she withheld needed treatments, thus hastening the old man’s death. They also pursue a civil trial to prove that Marti fabricated her claim on their inheritance.

Isham’s storytelling and character development early in the novel are engaging, despite dependence on gender and class stereotypes. (Apparently the San Joaquin Valley is rich with female assistants who exist solely to please their brilliant male bosses.) He hits his stride, though, when he delves into the civil and criminal murder charges Marti faces. If you ever wanted an inside look at what happens before the trial, here it is. From the mediation room to the judge’s chambers, Isham clearly describes the elaborate negotiations and the legal reasons behind them. It should be boring after a couple hundred pages, but in Isham’s enthusiastic hands, it’s not.

The author makes the arguments compelling, and readers will find themselves wondering about the outcome right along with Marti. Isham prolongs the suspense, saving the testimony of the court’s expert medical witness and the determination of Marti’s fate, for the very last pages of this engaging book.