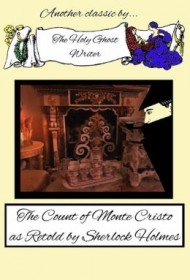 This peculiar book reveals quirky ambition. It takes some brass, after all, to imagine British literature’s foremost detective retelling the tale of French lit’s most renowned adventurer. The happiest prospect? Sherlock Holmes’ devastating wit at play on Edmond Dantes’ obsession with revenge.

Unfortunately, it never happens in this volume.

Written by an author calling himself/herself “The Holy Ghost Writer,” The Count of Monte Cristo as Retold by Sherlock Holmes disinters the Count, his allies (Abbe Faria, Bertuccio, Luigi Vampa, etc.) and his tormentors (Caderousse, Danglars, Villefort and Company), and it bounces around France, Italy and the Mediterranean like the original. But the author fails to make good use of his/her own gimmick: the book recaptures neither the Gallic dash of Alexandre Dumas nor the tart Victorian hauteur of Sir Arthur Conan Doyle.

For example, the author writes: “Going back to the early departure that morning, Madame Danglars had her carriage take her to the Passage du Pont-Neuf, where she got out and went through the passage.” This blandness is the voice of Sherlock Holmes, the master of deduction? The coolly intellectual egotist?

The author tries to salvage things with occasional exchanges between Holmes and his old friend Dr. Watson as they sit around Baker Street smoking cigars while the detective holds forth on the Count. But these asides, too, are betrayed by an inauthentic tone. “Smart man, yes a very smart man.” Holmes says of Dantes, sounding more American than 19th century British. Two paragraphs later, the sleuth takes a “scrumptious” bite of pudding, a word more suited to a U.S. TV commercial than Holmes’ world at that time.

Give the author high marks, then, for pluck (this is volume one of a projected series). But he/she hasn’t heard these famous voices clearly.