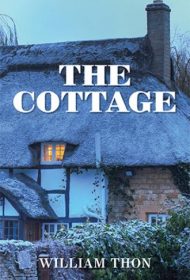 A consistent conflict spanning centuries of Western history lies at the heart of William Thon’s epic fantasy The Cottage.

The book’s main action stretches from 13th-century England and France to the progress of colonists in the Americas in the 18th and 19th centuries. Across this framework, the author maintains his theme regarding the natural world pitted against human forces.

Porius Saladin is one of the world’s last remaining wizards, living in an enchanted cottage in the forested wilds of Kent, England. The book begins in 1314, as the Christian forces of English King Edward II surround the castle of Melisende, the Queen of Magical realms, and seek to end her pagan influence on the land. Porius watches the bloody battle from his cottage through magical means as the king attacks Melisende’s forces, which include elves, wizards, goblins and trolls.

Thus begins a centuries-long battle in which Porius and his fellow mystical leaders struggle to preserve the old ways against a tyrannical foe. Thon isn’t subtle about framing this enemy as Christendom: Kings, clerics and priests seek to destroy the magic and mysticism of the ancient pagan world.

It’s an ambitious narrative vision, one that Thon sketches with copious research, facts and historical context. However, this doesn’t translate into a clear, compelling story. The text is dizzying in its shifting pace and rambling nature. The author regularly changes tenses and veers from the action to tirades against Christianity and long asides about ancient history. Misspellings and awkward phrasing are constant throughout, as are odd breaks in tone.

These issues muddy the story, which, because of its scope and ambition, requires a more direct, impactful approach. The author has obviously done his homework, and his descriptions of Porius and the other characters have their charming moments. What’s more, it’s clear that Thon’s message has implications for our modern world.

Unfortunately, too often the execution dilutes that message and makes the reading experience frustrating, limiting its overall appeal.