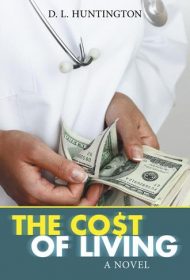 D.L. Huntington’s thriller, The Cost of Living, follows a rookie journalist on the trail of a murderous conspiracy targeting the homeless.

Newly graduated from college with a journalism degree, Rhonda Wells is unapologetically liberal. Eager to effect social change, Rhonda moves to New York and begins writing for a local paper.

Rhonda’s first assignment is a series of articles on the struggles of the city’s homeless population. On her beat, she learns that homeless people are disappearing—a mystery that leads her to the office of conservative, no-nonsense police captain Garth Kruger, whom she initially finds unhelpful and callous. He, in turn, bristles at her confrontational attitude.

As Rhonda and Garth work together, however, their antipathy softens, growing into respect and even (platonic) affection. Meanwhile, their investigation uncovers a plot by the nation’s elites to exploit seemingly expendable people.

Huntington aptly captures the initially prickly dynamic between the two main characters, as well as their blossoming mutual regard. It’s refreshing to read about two characters with opposing ideologies who care for each other while remaining true to their individual beliefs. The novel could even stand to be a bit longer, allowing the characters room to come more fully alive.

The plot is generally well-wrought, although with some room for improvement. For instance, Huntington reveals a great deal about the conspiracy in the story’s first few pages. Holding that information back until later in the novel would keep readers in greater suspense. Likewise, the final mission to disrupt the conspiracy feels perfunctory. A lengthier, more fraught action sequence would prove more rewarding.

Overall, The Cost of Living is an entertaining tale featuring appealing protagonists. Tweaking the plot to increase narrative tension would help it appeal to the widest possible audience.