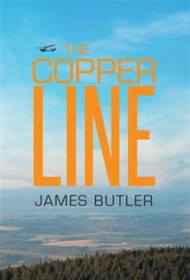 A plethora of flashbacks and a knotty narrative structure make this circuitous thriller by British author James Butler somewhat more complex than it needs to be.

The novel introduces ex-British Army soldier Joseph Allen, who is performing reconnaissance on a copper mine in a remote part of Paraguay. Shortly after, it delivers one of the many, many flashbacks that complicate the storytelling. Once everything is revealed, we learn that Joseph was wounded in Afghanistan and retired to his childhood home in Paraguay to become a pilot after his first serious relationship unraveled. He married a beautiful local, but her early death in a shooting incident scarred Joseph mentally and emotionally.

When Joseph’s sister Maeve, living in London, asks him to check in on one of her husband’s work acquaintances traveling through Paraguay, he meets Amanda Perry, an analyst assessing the possible expansion of a copper mine. This sets up the book’s fundamental conflict, as the mine expansion would negatively impact the local Lengua Indian community, cherished by Joseph and his uncle. It’s revealed that Maeve’s husband is scheming with corrupt government officials to expand the mine, and Amanda must appear to be murdered by the locals so the Indian community can be removed.

This overly complex series of events could have been far more tightly plotted. The main storyline can be exciting, and Butler describes aspects such as weapon handling and settings with some verve. However, the flashbacks are extremely interruptive. Readers may also find that Joseph is a little too macho to be likeable (he calls Amanda a “stupid bitch” twice within minutes of trouble starting, then slams her to the ground and ties her up—not exactly a meet-cute moment).

Overall, this throwback to the age of men’s adventure novels may have some appeal for fans of British action adventure writers like Andy McNab or Chris Ryan, but readers seeking more subtlety or innovation in their thrillers may find themselves wanting more.