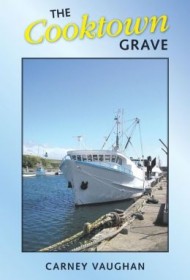 In this well-executed contemporary novel of justice delayed, set in Australia, a wise old cop investigates a series of brutal murders and the whereabouts of a prison escapee.

Dave and Danny Brannigan were devoted twins, but when Danny’s girlfriend finds him dead, the apparent victim of electrocution, his brother David, an electrical engineer, is charged and convicted of his murder. Nothing could be further from the truth, and one day, Dave makes a daring escape from his prison detail.

Like many before him, he seeks work as a seaman, keeping to himself, and saving his money. He might never have been found, but a brutal beating in a back alley brings him to the attention of the authorities — and his brother’s killers. At the same time, prostitutes are being slaughtered in Sydney, and now in Cairns, where Dave is hospitalized. Convinced the murders are linked, Detective Russ Byers investigates with intelligence, compassion, and tenacity.

Author Carney Vaughan draws his characters well, giving each a credible backstory. The good guys are very good, and the bad guys are uniquely despicable. There’s a great deal of Australian slang, but no worries, mates, Americans can grab the meanings in context, though a glossary might have been helpful. There are two major conclusions to this novel: the first deals with exquisite justice for the killers, and the second deals with corruption in high places. Both are deliciously satisfying. This is not a whodunit. Readers will know precisely who done it, and they will despise them for it.

There are no missteps here. The author succeeds entirely in delivering a believable dilemma and a meaty plot. Those who like their police procedurals a bit on the cozy side will likely find much to enjoy here