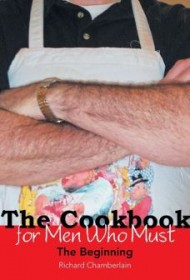 Man-in-the-kitchen Richard Chamberlain offers beginning guy cooks a few basics and plenty of encouragement in these 50 recipes, championing cooking competence for men whose “effort will be appreciated and well-rewarded.” Offering mostly simple, farm boy fare, Chamberlain demystifies cooking in his informal, chatty presentation and shows that with the right tools, techniques, and a stocked pantry, any man can cook.

Featured recipes include dishes on most guys’ short list: burgers, potatoes, pasta, chicken and dumplings, and biscuits with gravy. There’s chili, grilled items, several mayo-laced salads, cookies, cakes, and crumbles. Appetizers consist of familiar dips (spinach and guacamole) and nachos. While the recipes generally lack imagination, Chamberlain’s not out to impress: The lasagna and chili dishes are as exotic as it gets. Salt, pepper, chili and garlic powder make up the bulk of seasonings.

Recipes are presented in useful columned tables showing steps, ingredient groupings, and directions. On the down side, culinary terminology is often confused; Chamberlain admits that his Fried Chicken, for example, is not really fried, but rather “steamed” in a skillet — but actually it’s sautéed.

Chamberlain’s narrative reflects a manly, jocular tone. He encourages cooks to bang a head of lettuce on the counter to remove the heart and notes that “Some cooks would remove the seeds from the tomatoes and cucumbers…(but) we’re guys, so we eat seeds.”

While the author is mildly diet-conscious, encouraging cooks to gain control over their waistlines, his recipes (such as biscuits and mayo-laced potato salad) often counteract this mission. He recommends substituting honey for sugar, low/ light dairy products, and even eating two meals a day.

Chamberlain comes off as a nice guy—no food snob here. While the “DO NOT READ THE LAST CHAPTER” appearing throughout the cookbook creates a running joke warning readers to avoid the indulgent closing dessert recipes, lest they plan to “go to confession after you eat this,” it just might make men read to the end of this affable cookbook.