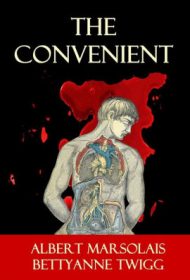 The Convenient is a compelling historical mystery set in Scotland in 1705, a time of political turmoil and intrigue, as well as contagious disease. The authors use real situations to inspire an eventful novel of medical heroism, murder, and much more.

As the story begins, physician Malcolm Forrester of Torrport, a small village near Edinburgh, is willing to risk death or dishonor to prove there’s an inoculation for smallpox. He often consults bedside with Elspeth MacLeod, who, although trained in Italy as a physician, is not recognized by the Royal College of Physicians in Scotland. Unable to practice legally, she uses herbs and her wits as a healer in Torrport.

One evening, the local laird’s ward arrives at Elspeth’s cottage, sick and in labor. Elspeth suspects the ward has been poisoned by arsenic and hides mother and child from all visitors. As the baby struggles to live, the question of its paternity looms; eventually readers learn that the ward—“the convenient” of the title—is mistress of a man whose identity proves shocking.

Meanwhile, Malcolm and others pursue their smallpox vaccine trial, despite violent opposition by traditionalists. And when the body of the local laird’s second in command is discovered submerged in a bucket at the launderer’s, Elspeth and Malcolm embark on amateur sleuthing, against powerful forces.

Malcolm and Elspeth narrate alternating chapters; more subtle differences between their voices would enhance the narrative. While the plot is complex, it’s never confounding (although there’s enough here for at least two or three separate novels). Cliffhangers keep readers engaged, and dialogue is snappy, utilizing humor to lessen the tension.

Overall, readers will find this a captivating story. Fans of the BBC series Call the Midwife and Anne Perry’s historical mysteries will find similar rewards here.