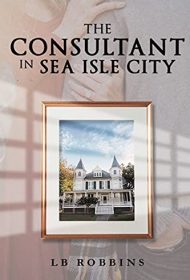 The Consultant in Sea Isle City is a novella featuring Terry Willoughby, a computer programmer from New York City.

Terry impulsively buys a small house in Cape May, New Jersey, which her fiancé considers a poor decision, jeopardizing their relationship. While settling into her new home, Terry makes friends with colorful neighbors, finds a new job working on computer issues at various area businesses, and uncovers a real estate scheme involving her property. This scam, which the neighbors help Terry uncover, slowly reveals itself throughout the work.

The story’s strongest aspect is Terry’s voice as narrator. Her comments are filled with wry humor. For instance, after talking to a client whose wife wrote the inadequate new computer code for his business after attending community college classes, she observes, “I finally met a man who trusted and loved his wife faithfully.” Or, when speaking to the seller about the house, the seller assures her it has a “completely sound electrical system,” saying, “You can take that to the bank.” She thinks, “I can do that! Pretty much, it’s all I can take to the bank.”

Her descriptions of small-town New Jersey life are also amusing. Entering a dress shop to consider selling some of her designer clothes and a wedding dress, she finds that the owner “had never heard of Armani or Diane V. She had heard of a wedding gown.”

Although entertaining, the story feels rushed. With so many different threads of Terry’s work, home life, and the real estate plot bundled in such a short work, it can be difficult to follow them all. So many characters quickly appear and vanish that keeping track of them becomes challenging. Additionally, a snippet of text appears in a different font from the rest, and lines that should be part of paragraphs are separate, which is distracting.

Readers will find many rewards here, but more careful formatting and slowing things down would make this piece more compelling.