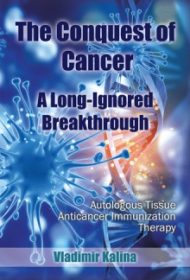 A young doctor’s unique surgical intervention in 1957 opened the door to a potentially significant cancer therapy breakthrough yet to be adopted by specialists. Vladimir Kalina hopes to change that in this informative, scientifically detailed tome.

The surgical technique that the late Karel Fortýn devised was performed on a middle-aged man with a gunshot wound who also had an advanced, inoperable stomach cancer. With no other options, Fortýn decided to devascularize the stomach and bypass it all together, but he then left the stomach within the body cavity to avoid other complications.

When the patient recovered, Fortýn was surprised to learn that the technique had triggered a spontaneous remission of the advanced cancer with no relapse. He named the technique “devitalization” and was successful in further animal and human experimentation. Despite this, his work was ignored and discredited by cynical specialists.

Kalina’s book is written as a tribute to his colleague’s work with the hope of renewing interest. It opens by explaining what he feels is wrong with cancer research, then describes Fortýn’s early life up until that first surgery in a hospital in western Bohemia. Employing Fortýn’s own notes, published papers, tables and illustrations, it then details his surgical techniques, animal studies and human surgeries done with positive results.

The book is well designed throughout, although the first 40 or so pages are a bit long-winded. Unlike typical medical books, the author openly and passionately expresses his dismay at the inattention to Fortýn’s work. While billions are spent toward a cancer cure, Kalina finds it “regrettable that we are shamelessly ignoring the fact that millions of lives could be simply saved.”

Overall, Kalina makes a strong case for revisiting “this extraordinary finding,” which could draw large readership from both medical specialists and cancer patients.