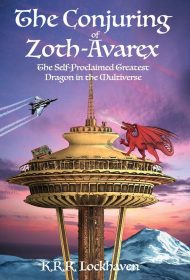 In the vein of Terry Pratchett, K.R.R. Lockhaven’s comic novel set in and near present-day Seattle, titled The Conjuring of Zoth-Avarex, is a lighthearted homage to classic fantasy fiction.

Harris, a recent graduate from a secretive magic school, lands his dream job working at the Site, a clandestine government installation devoted to magic. But he finds trouble his first day while helping Jake, a wisecracking Site firefighter, play a prank on a coworker during which he inadvertently conjures an adorable imp named Xop—without authorization. On the plus side, Harris makes two additional friends: Silvia, Jake’s gorgeous fiancée, and Ana, her feisty, adorable sister (and, naturally, Harris’s new crush).

They’ve arrived in time for a major Site project: to conjure a powerful dragon named Zoth-Avarex and bind him to their will. But an altogether predictable calamity results: When Zoth-Avarex materializes, he immediately eats the nearest conjurer and escapes with his chosen princess, Silvia, setting up shop atop the Space Needle and demanding his customary horde of gold. The ineptitude of Site leadership now exposed, Harris, Jake, Ana, and Xop set out to rescue Silvia themselves, assisted by soon-to-retire dragon slayer Eddie and Harris’s steady and sympathetic new boss Marian.

This is a fun quest story, with nerdy humor that delights in roasting bureaucracy (Think Harry Potter meets The Office). Lockhaven excels at situational comedy, such as a wizard’s duel recounted like a UFC fight.

The author also includes an ambitious alternate ending that pokes fun at dystopian trends in young adult fiction. Unfortunately, it hits the wrong note precisely because readers are so invested in Lockhaven’s characters that they only want the best for them.

Nonetheless, Harris, Ana, Jake, Silvia, and Xop are so easy to root for and it’s so much fun to spend time with them that readers will effortlessly overlook some occasional weaknesses to enjoy this amusing tale.