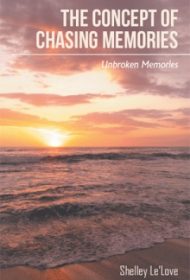 First love and its aftermath can cast long shadows over the survivors. Author Shelley Le’Love describes a relationship that haunted her and her path to eventual recovery in The Concept of Chasing Memories.

Le’Love was forbidden to date in high school, so moving on to community college meant she and her boyfriend could be together openly. She was overjoyed—until he stopped returning calls and texts and had numerous excuses for his absences. His cheating led to their breakup and a period of single life before Le’Love met, and eventually married, a man she had befriended on Facebook. She becomes pregnant but miscarries at six months and then must heal from the loss.

At just 38 pages, this story has very little meat to it, and what’s here is unfortunately very disorganized and often puzzling. For example, Le’Love uses a pen name on the front cover but what seems to be her real name (Shenelle Le-Ante Snyder) on the back cover. Then, in the text, she also introduces the nickname Ke-Ke, which she had previously ascribed to someone else in the story. In another passage, she describes a fight with her cousin that results in her getting kicked out of her grandmother’s house, adding: “and my cousin let me stay with her.” Was it a different cousin? We don’t know.

Le’Love incurs some painful losses here, but sometimes her point of view makes her seem immature and petty, as when she rants about how her mother didn’t buy her a car when she turned 16. “I cried,” she writes, “asking why I was born into this horrible family.” Phonetic misspellings like “wale” for “well” are also distracting.

The emotional impact of young love can be mined for effective stories. Unfortunately, The Concept of Chasing Memories doesn’t offer enough detail for readers to feel invested in this narrative or its outcome.