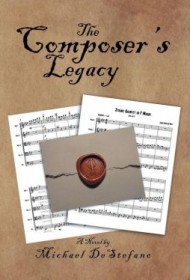 This fictional mystery follows a University of California Davis assistant dean of music who inherits the estate of a mysterious stranger, which includes brilliant, unpublished works of music. As the assistant dean endeavors to publicize this music, he learns that he has also inherited a mystery that could reveal a missing piece of America’s early history.

Of the two main storylines that occur in this tale – the struggle to publicize the music and the historic mystery – the former is engaging and suspenseful, relating a story of good versus evil as the assistant dean goes toe-to-toe with the dean, who’s own selfish goals would be ruined by the university’s performance of an unknown composer.

The latter unfortunately is a labyrinth of facts surrounding Delaware’s history that spans centuries, some pertinent to the story and some not, some factual and some fabricated. Even with the characters attempting to summarize at the end of the book, it’s still unclear how anyone solved anything and what significance (if any) it has to the music.

Unfortunately, the confusing history is not this novel’s only problem. The Composer’s Legacy lacks vivid and thorough descriptions. One character is repeatedly called an “older woman” and nearly 200 pages later mentions that she’s only 56. This same character is described to have “obvious charm,” but this is never portrayed though her actions and dialogue. Without a deeper understanding of the characters, it’s hard to feel emotionally vested in them or their plights

Points of disconnect exist as though the book were carelessly trimmed from a greater length. From one character opening an ancient scroll without mention of her obtaining it to another character apologizing for his “odd behavior” when no odd behavior has been displayed, these occurrences halt the flow of the story in its tracks. So, too, do the story’s obscure metaphors and redundancies.

The Composer’s Legacy contains the seed of a good story, but its realization is hampered by a plethora of shortcomings.