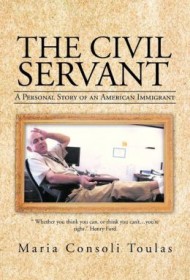 The journey of a man from his native Greece to a fulfilling life in America is the subject of this charming memoir, written by his wife.

The book opens with the random encounter between Maria and Andreas on a beach along the Mediterranean in the summer of 1967. Maria and a friend, vacationing in Greece, are relaxing on a beach blanket when a thin young man approaches with a friend and begins a conversation. Within three years, Andreas finds his way to Maria, who lives in New York, persistently pursuing her until they marry.

Maria, then a social studies teacher, is a career-minded woman. She finds Andreas intriguing because he is ambitious, self-reliant, and determined to make something of himself. After marriage, both pursue higher education. Although Andreas earns a degree in business administration, he believes the only way to be successful is to get a good civil service job. After years working menial jobs, he does just that.

Maria Consoli Toulas employs her understanding of social studies to successfully weave history, economics, politics, geography, civics and psychology into this tale, which often reads like an entertaining piece of fiction. She shows how her husband’s impoverished upbringing under dictatorship rule affected his core beliefs and shaped his future.

The author’s writing is descriptive and fluid, meandering like a stream. It sometimes bubbles actively over pebbles of thought; other times it flows slowly but steadily ahead through the couple’s life. Occasionally, dialogue is offered to enhance the telling. Toulas has a flair for bringing the vision of Andreas alive. Upon first seeing him, she recalls not only the chin dimple and piercing brown eyes, but that he “wore a scant, yellow bathing suit, which clung to his hips like a pinned diaper, exposing very hairy legs.”

In short, save for some spelling errors, The Civil Servant is a delight and would appeal to memoir readers as well as the author’s family.