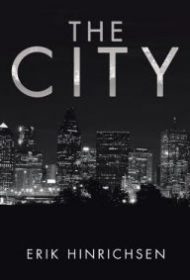 This book of short stories depicts a fallen world inhabited by vomit-soaked junkies, soulless serial killers, faithless priests and coldhearted gangsters en route to their own assassinations. In author Erik Hinrichsen’s view, The City (aka, civilization) is “a black hole pulling in all that was good, leaving in its wake an emptiness to be crafted by malevolent hearts.”

With echoes of Paradise Lost and The Wasteland (by way of Dante), these stories feature dark situations: a smalltown girl is murdered on her first night in the big city; a dessicated five-year old dies of cancer; mindless vigilantes torch churches and synagogues. Hinrichsen’s vision of hell—dispensed in loosely-linked, two-to-six-page bursts—is relieved by a few glimpses of innocence (helpless inmates in an asylum), fervent repentance (a homeless man chops off a finger before a church altar) and hope (“Intimations of light were already detectable”).

In the book’s last third, the load lightens. But ultimately, the author sidesteps Milton’s stated purpose (“to justify the ways of God to men”) for a postmodern lament. Absent both God and Satan, “now it was up to the world to go on without them and destroy itself or prosper.” In all, it’s tough sledding.

Hinrichsen’s prose is direct and suitably tart (“He had drugs. They wanted them, bringing money”), but he has a weakness for cliché (“the valley of the shadow of death”; “25 years of blood, sweat and tears”) and an overfondness for sentence fragments that lend a disjointed feeling to the prose.

As dystopian fiction, The City fares well in terms of the nightmare depicted and the baseness of human nature revealed. We even get to witness an execution by lethal injection and a mass suicide. “Winter was here to stay,” Hinrichsen writes. To his credit, that chill endures deep inside the durable reader this book requires.