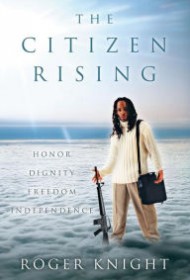 A prosperous black man who believes he belongs to a race of powerless people devises a way to gain social, economic and political power in this inventive novel set in present-day New York and New Jersey,

Rohillo “the Citizen” Jabel of Queens has lived well due to a fortunate upbringing, yet he recognizes that others could use a hand up. He organizes a group of eight highly successful black men and women and convinces them to help create a better black experience for all by working together for a unique cause.

Beginning with a blighted commercial strip, they develop new business, create jobs and gain clout through their new political arm—the Commonwealth Party—with the ultimate goal of quietly taking over the state of New Jersey. But their efforts ruffle feathers among some crooked movers and shakers who fear the group’s inroads are cutting into their own shady but lucrative real estate deals. The clash results in destruction, fighting and fatalities.

Knight’s novel is thought-provoking and detailed in its premise and development. While many characters seem too perfect and pretty to be real, the unique magnetic intensity and emotions of protagonist Jabel bring him to life.

The book’s main flaw is its tepid start and minimal drama as Jabel draws together his team and lays out his plan. The storyline suffers due to the slow pace of the many character introductions. The author makes up for it later, however, by building more emotional resonance and adding tension-filled drama through some well-developed scenes that build to the climax.

Overall, this is a novel with ambitious aims. It should appeal to a general audience—and particularly to readers who can appreciate its provocative ideas for solving real-life issues in black communities.