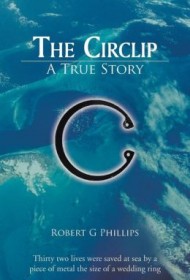 The Circlip: A True Story is a puzzling little slip of book, loaded with imagery and potential but not quite sure what it wants to be.

It is the true tale of a small mail ship, Lochiel, which in the pivotal scene is caught in a terrible storm. A chance discovery of a tiny steel ring called a “circlip” saves 33 people from certain doom.

There is no lack of drama in the yarn, and the writing during the climatic moments is terrific, building tension and placing readers squarely onboard as the ship pitches in the violent waves: “The captain had been at sea for 35 years and never heard the order ‘Abandon Ship.’ The responsibility of having to give the order at any moment weighed heavily on him. It was a black night. He knew survival time in the freezing sea would be less than five minutes.”

But the storm scene lasts for only a handful of pages in an otherwise un-noteworthy and disjointed recitation of facts about Scotland’s geography and a smattering of history. As presented, the ship’s salvation seems more like a great barroom boast or a tale passed down at Grandfather’s knee. It is as if author Robert G. Phillips had one great moment to share, and it is over much too quickly.

If he had been intent on focusing on only one scene, he might have recast the adventure into a children’s book with the ship as the main character. But with the author’s considerable storytelling ability, it would have been worthwhile for him to dig deeper and craft a much broader and winsome look at a seafaring way of life that is now gone. As it stands, the book is worth a read, but only for those who can overlook its sparseness.