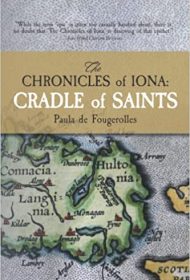 Paula de Fougerolles’s Cradle of Saints is the fourth installment to her highly ambitious The Chronicles of Iona series set in sixth-century Ireland, Scotland and England.

Fougerolles is an accomplished scholar specializing in Anglo-Saxon, Norse and Celtic history. Her expertise shines through every sentence of this story.

The book jumps right into the action previously established, immediately connecting readers with its characters. There’s Aedan mac Gabran, a warrior credited by some as the founder of Scotland, and Columba, an Irish abbot whose passion for a Christianity still taking hold in Europe’s western wilds ultimately earns him sainthood. This pair help drive the action, which revolves around epic rivalries, decimating plagues and shifting alliances.

The book starts in the year 574 as Aedan’s two wives and six-year-old son are being held captive by Baetan mac Cairell, a tyrannical Irish overlord. Aedan holds the daunting task of mustering the armies, ships and weapons of northern Ireland’s Dal Riata against Baetan, an act of war that necessitates a tenuous balance of alliances. Building goodwill and alliances comes in many forms for Aedan, including a short-notice wedding to Lady Lassar of the Eagles clan of Hibernia (Ireland) and a powerful leader in her own right.

Meanwhile, Columba sets out to find Aedan’s brother, who was stolen away by monks and is now a novice in the Iona, or Scotland. And the bubonic plagues poses a fatal threat to all of Europe.

The author delivers a meticulously researched, detailed context for the action, from her nuanced sense of the era’s politics to her description of the detailed accoutrements, bearing and tribal markers of the pagan Picts with their blue tattoos and their “warband of painted men,” speaking a “fluid tongue” and projecting a bearing “bred for warfare.”

The story’s realism and authenticity is constantly compelling. Combined with the author’s narrative flair and her strong, sympathetic characters, Cradle of Saints is sure to hook historical fiction fans who have an interest in this era.