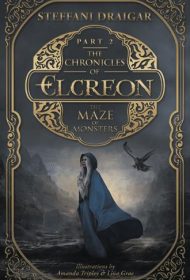 Steffani Draigar’s second installment in her Chronicles of Elcreon series opens with a veritable menagerie of fantastical creatures.

The sequel picks up where the first book left off. Thanks to a brief recap at the beginning, even new readers will know about the exploits of Angel, a foundling with magical powers raised by an elven warrior. After battling evil Lord Vondoom and enduring torture, Angel is desperate to escape at this story’s outset.

Instead, she’s taken by Luthrain, a warlock mercenary hired by Vondoom, and joins a caravan of prisoners journeying through the Ghost Mountains, a range populated by all manner of nasty creatures. As Angel discovers a former companion and begins to formulate an escape plan, monsters beset the group. “There were birds whose calls sounded like crying babies … Giant wasp nests clung to cliffsides and tall trees, all in the shape of screaming faces.”

Angel escapes, only to become imprisoned by different barbarians, along with Luthrain and Romulus, a handsome bandit who provides the novel’s comic relief. The trio undergo a series of dangerous trials, and even as Angel struggles with a dark spirit fighting to control her body, she must find ways to survive in the face of impossible peril.

Draigar spares no details when it comes to the book’s impressive cast of monsters. Complemented by hand-drawn illustrations, the book revels in descriptions of the beasts, as well as the magical powers of a diverse array of beings.

Unfortunately, this distracts from the action and journey of the central character. The book’s entire beginning feels like an unending parade of monsters, forestalling Angel’s backstory and interior struggle. The book also has some simple editing issues (overreliance on passive voice, copy-editing mistakes, etc.).

Despite such issues, the author’s commitment to her imagined world has a certain charm. And when Angel’s struggles return to the story’s center, her character is complex, determined and compelling. It just takes time to find these qualities.