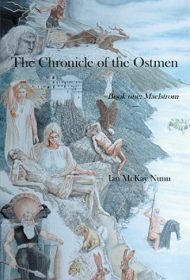 The mid-ninth century, with its Norsemen and their savage conquests and ancient mythologies, is on full display in Ian McKay Nunn’s sprawling historical novel, Maelstrom, the first in the planned The Chronicle of the Ostmen series.

Readers are immediately swept into the story, meeting young Mael MacConaill in the Ard Mhacha monastery hours before a marauding band of Danes sweeps in to overpower his clan. Mael is taken hostage, and the Norsemen continue their path toward Saxony, cutting a fierce path in their wake. Mael struggles to survive and is tasked with learning Danish ways that eventually serve him well. For example, he befriends fellow captive, nine-year-old Godiva, teaching her to speak Danish as she teaches him the Saxon language.

Nunn’s narrative focus eventually abandons Mael, however, as readers are introduced to an overwhelming cast – some historical and some fictional – while the Danes stay their course. Ultimately, the Danes encounter their most formidable challenger: Aethelred, King of Wessex. Approximately one-half of the book is devoted to the conflict between the Danes and the Saxons. Nunn elaborates on the strategies from both sides, sparing no details of the fierce brutality that accompanies the battles.

The author weaves a religious tone throughout the saga, drawing from Norse mythologies of Odin, Thor, and company, as well as the traditional Christian narrative. His extensive cast of characters can sometimes be mind-bending, as when both the Saxon king and an abbot share the name Aethelred. The author does, however, include a character list as an appendix. Also on the plus side, the book is peppered throughout with a series of skillful hand-drawn illustrations.

Although the narrative could be tightened and characters eliminated to make the story easier to navigate, those who enjoy medieval tales or who like to delve into the details of military planning and execution will appreciate the novel. Overall, the book is a respectable introduction to what the author intends as a multi-part epic.