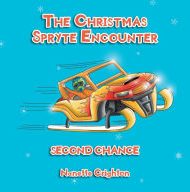 This children’s picture book encourages children to believe in holiday magic. Told through rhymed couplets with simple illustrations, the story has a year-round message of behaving kindly toward others.

The story’s narrator is a nine-year-old boy. Headed with his family to buy a Christmas tree, the boy is out of sorts, as he had been ridiculed earlier for believing in Santa Claus. (“My buddies had jeered me all day at school/ For believing in Santa; they called me a fool!”)

Humiliated and looking for someone to take his anger out on, he starts to tell his younger brother that Santa Claus isn’t real when a tiny elf buzzes past him in a miniature flying ATV.  She reveals that she’s the “Second Chance Spryte” and offers the boy the option of behaving kindly toward his brother instead of spoiling his holiday fun. If the boy makes the wrong decision, she cautions, he will be faced with “a Hickory Switch” at Christmas instead of toys.

Ultimately, the boy learns an important lesson: “When YOU’RE good to others, you feel good yourself./ ‘You should know this by now,’ sighed the Second Chance Elf.”

This is an entertaining story, with natural rhymes that flow pleasantly as the tale progresses. The colorful artwork enhances the text (although young readers may wonder why it isn’t more festive: the spryte wears orange, green, and blue instead of red and green, and her vehicle has fire decals instead of holiday ornamentation).

The story features some words young children may not recognize (“pith,” “shiny runners,” “blustered”), and parents who avoid intimidation and violence as motivators for their children may not approve of the hickory switch as a form of punishment.

Nonetheless, the rhymes are delightful to read aloud, and the story presents a clear and valuable message. Children will likely enjoy this holiday story, and parents can use it to discourage older siblings from robbing younger brothers and sisters of holiday fun.