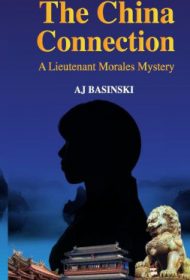 AJ Basinki’s mystery novel, The China Connection, follows its protagonist as he attempts to rehabilitate his tarnished reputation.

Mario Morales is a retired policeman working as head of security aboard an ocean liner when he’s charged with beating his wife, Sun Li, who works on the same cruise ship. Sun Li remains in a coma, leaving her incapable of exonerating her husband.

While Morales and his wife have not been married long, his great love for her is established early in the story. It’s also evident that he knows little about her beyond that she has a sister, is originally from Shanghai, and served a short prison term for her role in a drug smuggling conspiracy. This limited knowledge would seem like a red flag, but not to Morales; he’s captivated by her beauty.

Following a court appearance, and with the unwitting help of his attorney, Morales escapes from house arrest in Miami. He travels via a freighter to the Panama Canal, then on to China hoping to solve the crime himself. His investigation will reveal, among other twists, a plot involving the FBI and a state senator.

Basinski ably describes the physical attributes of the main characters and provides interesting snippets of backstory, and the plot, settings and characters are well developed. The narrative is told in short chapters, creating a fast, easy read.

The mystery’s primary fault is the often-stilted dialogue; the characters’ voices are indistinct, their verbal interactions limited and contrived (“I’m not sure that talking on the telephone is exactly the best way to discuss these sensitive matters. There is a small deli near your apartment that I understand is quite good. I believe it’s called Tom’s Diner. Could we meet there in say half an hour?”). Morales narrates much of the novel; however, occasional switches to an omniscient narrator are abrupt and make little sense. And perhaps it’s just a typo, but the misspelling of the word gracias as gratias is disconcerting.

Despite such drawbacks, the plot is engaging and includes a few fun surprises, as any respectable mystery should.