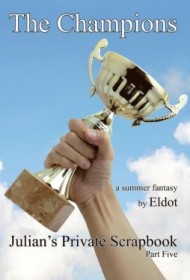 The conclusion to a sexually infused five-novel series, The Champions takes place during the last day of a scout camp during the summer of 1962 and follows several groups of boys as they deepen their relationships, build on new skills, and ponder life after camp. Much of the novel depicts their various intimate explorations, from a final ejaculation contest known as “the Shooting Gallery” to the couples pleasuring each other on the bus ride home. In between, several plots building during the previous books reach their end.

Geoff, one of the oldest scouts, makes his move — even with his injured foot — to seduce the scoutmaster, Mark, in the middle of the night. Julian, while working on his remarkable drawings, befriends Sarge, the camp’s quartermaster, and draws out the gruff retired Army man’s soft side, even calling him “Uncle Max.” Tom, continuing his process of maturing, learns how to get out of uncomfortable situations without the help of his lover Nick, and even becomes a confidante to other scouts worried about their relationships.

Mark comes across as one of the strongest figures in this novel, encouraging all the scouts under his care to become the best that they can be. He makes plans for Julian to receive art lessons after camp, further developing his talent. He shows his tremendous strength, both physical and moral, during his late-night encounter with Geoff. It’s no surprise that his troop wins all the prizes at the last day’s competitions, or that Julian has a crush on the scoutmaster.