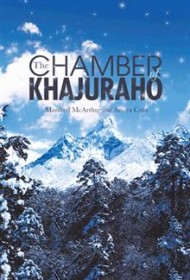 A mystical mystery rolling from California to India, composed by a father-daughter writing team, The Chamber of Khajuraho explores one man’s humanness and his longing for spiritual inspiration.

The “chamber” first appears to middle-aged Ian McArthur, a highly idealistic but unfocused man, in a vision so compelling it causes him to leave a girlfriend, a devoted daughter and a successful construction business, fly to Amsterdam, buy a van, and head toward India, to the legendary temples of Khajuraho. The chamber visions persist, increasingly detailed, often containing enigmatic wisdom delivered by a figure Ian calls “Monk.”

Ian is joined in this journey to the temples by Eva, a beautiful Dutch woman, and later by footloose Australian Herb Flowers. Everyone Ian meets offers hints about the spiritual treasure he seeks, especially the ancient bookseller Tcelfer Luos (whose name spelled backwards is “reflect soul”). Meanwhile, a desperate criminal stalks the travelers, convinced from overhearing their conversation that the chamber holds a secret cache of worldly riches. Eva fears she’s losing Ian as he nears his destination, while he thirsts for answers: “Will I ever meet Monk and go to the temple for real?”

The authors state that this engaging romp has parallels to their experience (note the father-daughter connection in fiction and real life). Set in the heady 1970s and peppered with the hipster talk of those times, the complex storyline rings true enough. However, the book needs judicious cutting: a plethora of characters could be consolidated into a handful; and the daily, sometimes hourly travelogue format gets tiresome. (“Driving out to the main highway, we stopped to get a picture of the town…The elevation was approximately 4,500 feet.”)

As fiction based in factual events, The Chamber of Khajuraho is a bold attempt to link the subculture notion of free spirits to the practice of true spiritual freedom. Despite its flaws, it should appeal to readers who appreciate exotic mysticism and a twist in their tales.