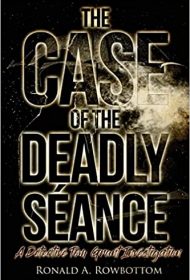 Detective Tom Grant is weeks away from retiring with the city of London, Ontario, Canada police department when he’s assigned to investigate the suspicious death of a teenage girl. As he pursues this and a later case, contemporary issues surface, including cyberbullying and the fentanyl crisis.

The often-shunned, overweight victim was the recipient of constant belittling. After careful examination, Grant reasons her death was a murder. Among those he interviews are her only friend, her parents, the high school bullies and a neighbor.

Seemingly unrelated, Grant’s attention is soon also required to investigate a recent spate of deaths and overdoses due to fentanyl. As the story evolves, these two plots coincide.

Unfortunately, what could be an intriguing narrative is bogged down with too many mundane details, such as specific addresses, routes and times. The story isn’t helped by the inclusion of blocks of nonfiction dropped into the narrative: information from the Canadian Criminal Code, background on various locations in the story, photographs, charts and more.

Grant is portrayed as a caring and competent detective. As his retirement draws closer, he harbors concerns about beginning a new phase in his life. While relatable, these thoughts are only internalized and never shared with his wife or colleagues. This is unfortunate, as showing him confiding in someone would have added depth to the story.

In the end, the two mysteries never add up to one. The threads holding them together are thin and frequently broken, and too much time passes between the two investigations, as if the first has been forgotten.

As a result of such issues, The Case of the Deadly Séance proves a frustrating read overall.