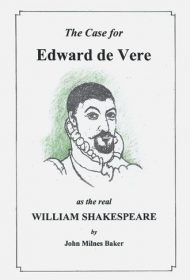 In his slim volume, The Case for Edward de Vere, John Milnes Baker argues that de Vere was the author of William Shakespeare’s plays.

This booklet is an “elementary introduction” to the thesis (posed by Oxfordians) that de Vere, the 17th Earl of Oxford, not “Will Shakspere” from Stratford-upon-Avon, is the author of Shakespeare’s canon.

Experts have long believed that Will Shakspere and William Shakespeare are the same person. Baker questions, however, whether a man of Shakspere’s limited education and travel could have written Shakespeare’s plays and sonnets. He points to six instances of Shakspere’s handwriting that imply he was possibly illiterate.

By contrast, he notes that de Vere produced “poetry, skits and plays, for the court,” and that Queen Elizabeth herself supported his literary talents. He also cites de Vere’s extensive travels to Italy (where at least ten of Shakespeare’s works are set) as evidence of his authorship.

Baker presents several intriguing bits of evidence. However, some of the author’s bibliographical references lack a scholarly foundation; on multiple occasions, for example, he cites blog posts.

Baker also makes some questionable claims. He states “the third earl of Southampton is generally recognized as the “Fair Youth” in the Sonnets,” and implies that Shakspere, thus, couldn’t have authored the sonnets due to the “rigid class system of the…era.” Indeed, it would have been scandalous for Shakspere to address the earl directly in any friendly or affectionate form. But Shakspere did not refer to the earl directly, instead creating ambiguity by referring to his subject as the “Fair Youth.”

Further, Baker implies that de Vere drew upon his own experience as a pirate captive when Hamlet wrote to Horatio that he was captured by pirates in Shakespeare’s play. He doesn’t, however, provide any evidence to support this connection.

Baker offers a useful starting point for those intrigued by this authorship controversy. This book is unlikely, however, to convince those not already on his side of the argument.